With most people looking forward tucking into a few chocolatey treats over Easter, we thought we’d take a closer look at sugar. We spoke to Dr Tessa Young, who specialises in weight loss and bariatric medicine at Illawarra Medical Centre, about the health risks associated with eating too much sugar and simple ways to avoid overindulging.

We are starting to see a growing number of people advocate for a low sugar diet. How bad is sugar really and, if it is so bad, why is it so easily available and not forced to come with warning labels?
We are starting to understand that excess sugar is the cause of many health problems. This can start with poor teeth development in children and lead to obesity, diabetes, heart disease, cancers and more health problems later in life. 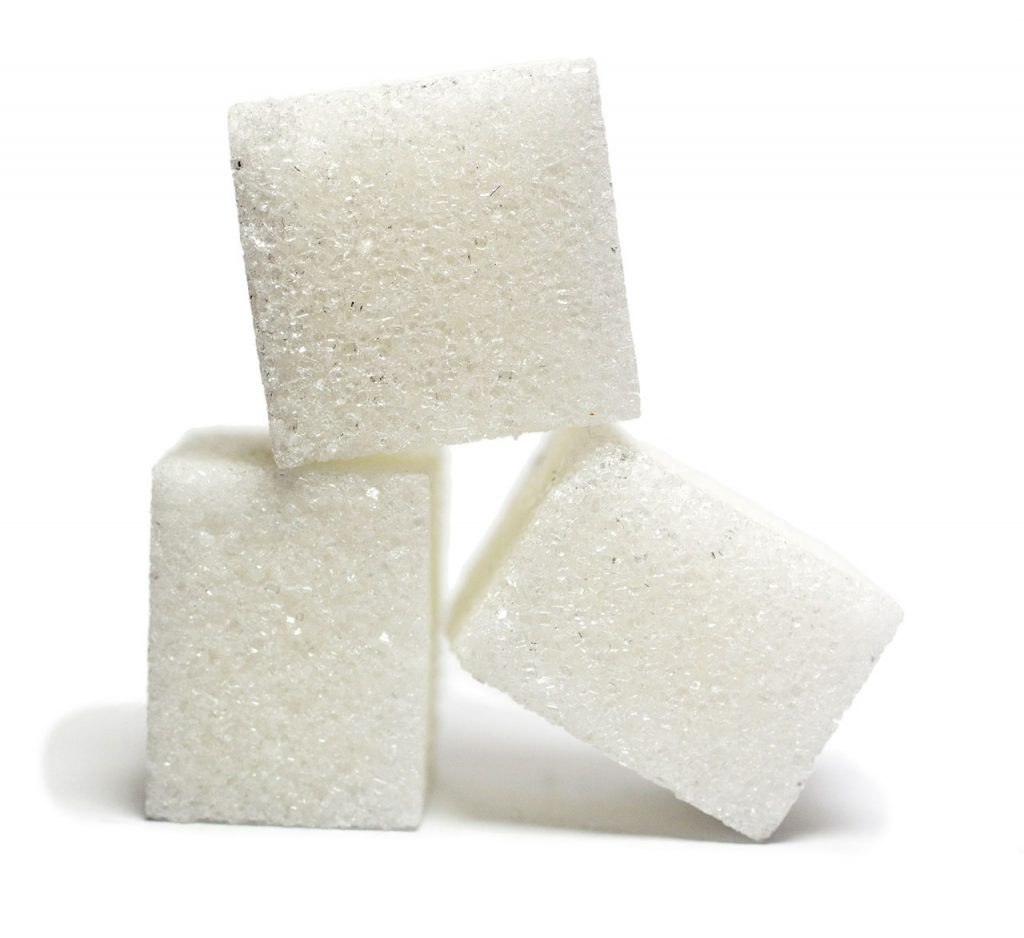 In the 1950’s and 1960’s, they started researching why there was such a rise in obesity and heart disease with the introduction of processed foods and supermarkets.  There were two main schools of thought on this – the first was that it was due to the amount of fat in people’s diets, while others believed it was due to the amount of sugar.  The anti-fat group won the debate at the time, and so the “low fat” message spread.  As with any consumer driven product, we saw supermarkets and food producers respond to the public demand for low fat foods by stocking their shelves with products that described themselves in that way. In order to remove fat from many of these products, however, it meant that the sugar content actually went up. As a result, obesity continued to rise, as did heart disease and many other illnesses.  That does not mean fat is good and sugar is the cause of everything, but there is probably a message in there somewhere – and one that I’m sure we all heard from our grandparents and don’t adhere to – and that is to eat “everything in moderation”.

One of the other major changes we have seen since that time is that people can now afford to buy in excess and eat in excess, and no doubt that has contributed significantly to a rise in these health issues associated with too much sugar.  When our grandparents were young, “treat” foods like cakes and soft drinks were exactly that – a treat, eaten only a few times a year on special occasions.  It is now normal for people to eat something every day and still call it a treat, when it is really part of their regular diet.

With a growing number of sugar-free advocates and people now becoming more aware about the impact of too much sugar in their diet, supermarkets are starting to respond to consumer pressure for low sugar and no-sugar products. It’s important to remember, however, that supermarkets are still driven by profit, not health, so they will continue to stock what people will buy and this can result in large differences in what is available from suburb to suburb, depending on the patterns of community spending.

In Australia, the nutrition labels on foods do tell you how much is in a serve, however, this serve is normally based on the recommendation for an average male and assumes that you will only eat that one high fat/high salt/high sugar product in the day.  What we know, though, is that most people don’t adhere to serving suggestions and/or they have more than just that one serving suggestion throughout the day.

If we were to take our grandparents’ advice and eat everything in moderation, what does that mean for sugar?  How do we know what moderation looks like?
The World Health Organisation (WHO) looks at and compares research available from all over the world to come up with recommendations to improve world health.  Their current advice about sugar is that free sugars should make up less than 10% of someone’s daily intake and optimum health benefits occur when adults stick to less than 25g of sugar per day.  ​

What are free sugars?
Free sugar basically means the sugars from anything in a packet, so you don’t need to count the sugar in your vegetables or your two serves of fruit in a day, but you do need to count anything that you drink or consume throughout the day that comes in a packet. As mentioned, all food labels will tell you the amount of sugar contained in that particular food, as per the example to the right.

So what does 25g of sugar look like?
There is a fabulous Australian film that talks about this in an entertaining way – That Sugar Film.  It is well worth watching because it helps people to see that the “healthy” foods they thought they could eat in any volume are often the cause of hidden high sugar intake.

Most people know that when they eat cakes, sweets, biscuits, chocolates etc, they are eating foods that aren’t good for them but it is often the hidden sugars found in cereals, yoghurt, juices, marinades, pasta sauces and other foods that are not considered in their overall sugar intake.

To give you an idea of how much 25g of sugar actually is: 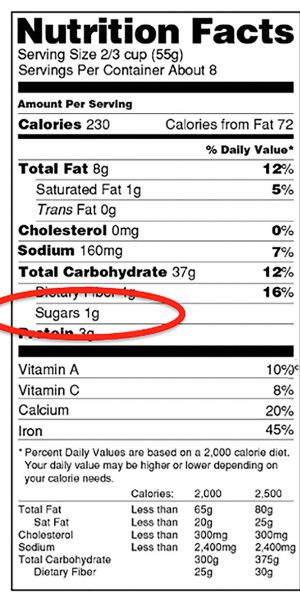 You can also take this quiz to get more of an idea of how much sugar is contained in some of the food and drinks consumed in Australia every day:

ABC QUIZ – What Does Six Teaspoons of Sugar Look Like?

Is it better to have artificial sweeteners, sugar substitutes or things like honey?
When artificial sweeteners are consumed, our bodies respond to the sweet taste and release insulin to break down the sugar.  When there is no sugar to break down, they tend to make us crave more carbohydrate or sugar-based foods, so that we can use up the insulin that has been released.  This basically means that artificial sweeteners can be just as bad, if not worse, for your health than the real thing.  They can, however, be useful for people who need to reduce their sugar intake urgently (for example, diabetics) and who need to have an alternative as they wean their taste buds off sugar, but in general they are best avoided.

Sugar based foods that have been minimally processed, like raw sugars or honey are better than more refined sugars, but they are still sugar based products, so the same rules apply. 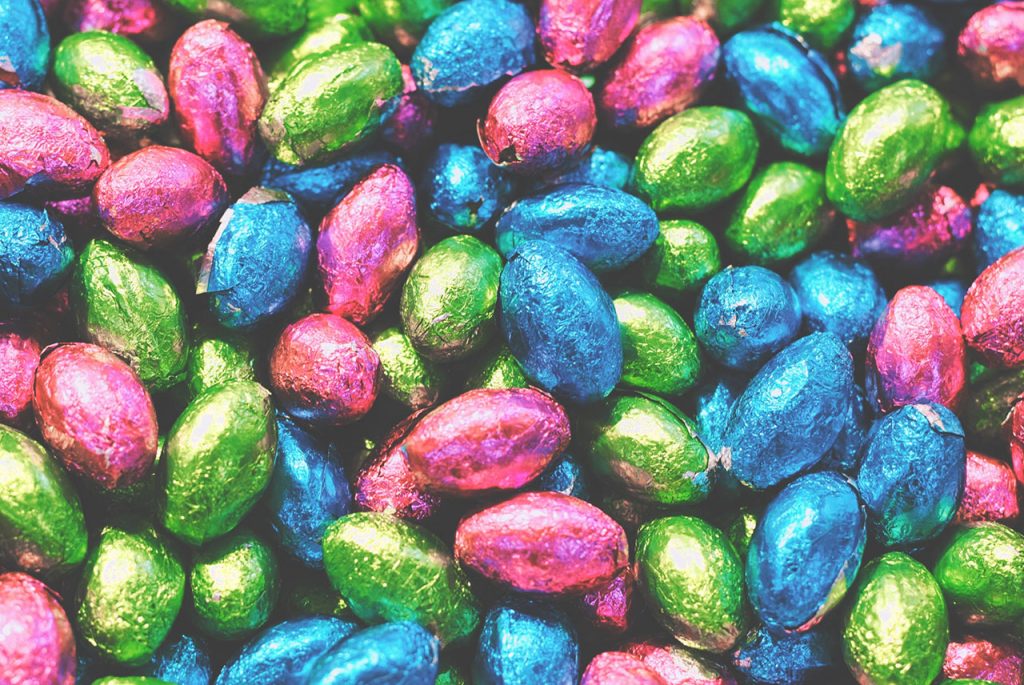 With an abundance of chocolate stacking the shelves at this time of year, what are your recommendations over Easter to help us avoid eating too much sugar?

​1. Try not to go too crazy with Easter eggs for your children.  Rather than giving the kids huge eggs, why not give them smaller ones or a different gift all together?  If they have received lots of chocolate, try to spread the intake out rather than allowing them to gorge all at once and explain the reasons why, so that they start to develop a good understanding of how sugar fits into an overall balanced diet.

2. Reduce your other free sugar intake.  Look at the rest of your day and keep it as clean as possible, so that the only sugar intake is coming from chocolate.  Maybe have eggs (real , not chocolate!) for breakfast, rather than cereal and avoid having any yoghurt that day.  Stick to water to drink and eat your veggies.

3. Encourage children to eat their healthy food first, before they have any chocolate, so that they physically can’t get as much food in.

4. Increase exercise. Sugar is an immediate energy source for exercise and the recommendations assume that we are all doing our heart health minimum of 10,000 steps in a day to burn off the sugar that we eat. So, over Easter, I would recommend increasing your exercise on the days when your sugar intake has increased.

To find out more about the impact of sugar on your health, visit:

To book in an appointment with one of our GPs to discuss any health concerns you have regarding your diet or overall health and wellbeing, book online or contact us on (08) 9208 6400.

About the Author: Dr Tessa Young

Tessa is a GP at Illawarra Medical Centre, with special interests in women’s health, weight loss, paediatrics and bariatric medicine. As a former professional dancer, Tessa enjoys anything dance-related outside of her work as a GP. She is also a fitness instructor and enjoys anything to do with fitness, particularly acrobatic yoga.